Cerumen, or earwax, is produced by the body. to protect the ears. Earwax is lubricating as well as antimicrobial.

Untreated buildup can cause hearing loss, discomfort, ear pain, disorientation, ringing in the ears, and other issues.

Earwax can be removed in various ways, some of which can be performed at home.

What exactly is earwax?

Cerumen, or earwax, is produced by the body to protect the ears. Earwax is lubricating as well as antimicrobial.

Most of the time, chewing moves old earwax through the ear canal, while the skin in the ear grows from the inside out.

It falls off when it reaches the outside of the ear.

Earwax is formed on the outer surface of the ear canal rather than deep within the ear. Earwax is formed by combining dead skin cells and hairs with secretion from two separate glands.

When your ears are clogged with wax, what does it mean?

Earwax is when it has accumulated in the ear canal to the point where it is causing symptoms of a problem.

It is critical to understand that most people never need to clean their ears. Ears are meant to self-clean. Cleaning your ears with cotton or hairpin swabs can cause damage to your ears, resulting in earwax buildup that commonly causes your ears to become blocked.

This only serves to increase the depth of the earwax buildup, increasing the risk of permanent ear injury.

What are the potential side effects of earwax buildup and congestion?

Excessive earwax can aggravate the symptoms of earwax blockage if left untreated. Hearing loss, ear discomfort, and other symptoms may be present.

Earwax buildup can also make it harder to see into the ear, resulting in potential problems going undetected.

Is the color of your earwax significant?

Healthy earwax appears in various colors, but each color has a specific meaning. First, determine whether you have wet or dry earwax.

Wet earwax comes in various colors, such as pale yellow, honey, and orange-brown. Wet earwax is quite sticky.

Dry earwax is typically white or gray in color and rough.

In both circumstances, darker earwax is older earwax. It’s dusty and has been exposed to more air.

If your earwax has turned into a discharge, such as white or greenish pus, or if you find it on your pillow after sleeping, you should see a doctor.

You should also see a doctor if you notice blood or your earwax is black.

Another intriguing aspect of moist or dry earwax is the difference between the two.

People of European and African descent are more likely to have wet earwax.

The earwax of those of Asian, East Asian, or Native American origin tends to be drier than other types. Genetics has anything to do with this.

Additionally, those with moist earwax are more prone to require deodorant. People who have dry earwax are deficient in a substance that creates a sweet odor.

What are the signs of earwax buildup and ear congestion?

Among the symptoms of this illness are:

In the ear, there is a sensation of fullness.

The ear is hurting.

Hearing problems that may worsen in the future.

Hearing a ringing in the ear (tinnitus).

Itching sensation in the ear.

An odor or discharge from the ear.

Who is afflicted by earwax buildup?

Anyone can develop earwax. Children and healthy adults are expected to be impacted by 10% and 5% of the population, respectively.

However, the following people are more likely to be affected:

Individuals who insert cotton swabs or other items into their ears.

People who are still developing.

Individuals who have ear canals that do not allow for a natural flow of earwax.

Children produce earwax. Be cautious when cleaning their ears as long as they do not generate excessively. To clean the outside, use merely a washcloth.

Don’t be concerned unless your youngster exhibits symptoms of earwax buildup.

Pulling or tugging on the ears, inserting objects in the ears, or hearing issues are some of the symptoms. Contact your healthcare practitioner if this is the case.

If an older person wears hearing aids, earwax buildup may be an issue. They may even choose to disregard their hearing. Hearing loss can be caused by earwax and should be corrected.

How are earwax buildups and obstructions identified?

To detect if earwax has formed, your healthcare practitioner can use special otoscope equipment to look within your ears. 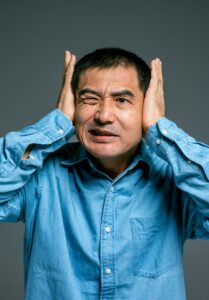 What is the treatment for earwax deposits and blockages?

There are various methods for removing earwax. Some of these techniques can be carried out at home.

You can use a cloth to clean the exterior of the ear. Do not squish the cloth and insert it into the ear canal.

Cerumenolytic solutions (solutions to dissolve cerumen) can be injected into the ear canal. Among these options are:

You can also soak a cotton ball in the solution and apply it to the affected ear, allowing the solution to seep into the ear.

Irrigating or injecting the ear is another technique. The ear canal is flushed out with water or saline solution using a syringe.

This is usually done after a cerumenolytic has softened or dissolved the earwax.

Finally, your healthcare professional may manually use special devices to remove the cerumen. The healthcare provider may use a cerumen spoon, forceps, or a suction device.

Any time you have tubes in your afflicted ear, or even fear that you might, you should call your doctor right once (s).

What to Avoid Cleaning Your Ears

Home suction devices (such as Wax-Vac®) should not be used. They are ineffective for the majority of people and are not recommended.

Ear candles, marketed as a natural method of removing earwax, are unsuccessful. Burns to the pinna and ear canal, as well as perforation of the eardrum, are among the possible outcomes.

How can I keep earwax from accumulating and plugging my ears?

Nothing should be put in your ears to clean them. Only use cotton swabs on the outside of your ear.

If you require your earwax removed by a doctor more than once a year, ask them what they recommend to prevent earwax buildup.

Remember that earwax isn’t necessarily a bad thing. Your ears will not become infected as a result of using it. On the other hand, Earwax can cause problems by irritating your ears and preventing you from hearing effectively.

It is only safe to clean the outside of your ears and soften the wax with drops of water. Always get the advice of your healthcare provider before using an instrument to remove earwax.

Brought To You By – Ear Wax Removal Bury st Edmunds

Learn about Earwax Removal and Micro-suction